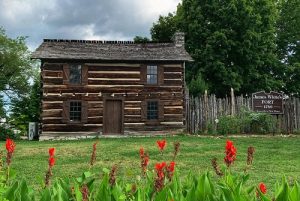 James White, The Founder of Knoxville, came to the future site of Knoxville in the early 1780s. His service in the Revolutionary War earned him a land grant of 1,000 acres. White built the first permanent structure, his two-story log cabin, in 1786. Two years later, White enclosed the log cabin and other structures with a stockade fence for protection from wild animals. White was a friend of the Cherokee Indians in the surrounding area. White negotiated several Cherokee and white settler treaties. White opened his home in peace and to trade with him. The courtyard of the Fort was used as a stable for domesticated animals such as horses, cows, pigs and sheep. The area around the Fort was cleared of trees, and the vegetable gardens and tobacco crop were grown for food and commerce. James White partitioned part of his land in October 1791 to establish the town which would become Knoxville.

White named the town for Henry Knox, President Washington’s Secretary of War. With the help of White’s son-in-law, Charles McClung, 64 lots were divided into 16 blocks, each lot being one half acre in size. The cost was $8.00 per lot and a lottery drawing was held to assign the lots. White continued to live in his Fort until early 1793 when he moved upriver to another home near the present site of the South Knoxville Bridge. In later life, he was promoted to a General in the War of 1812 and continued to be a guiding force in the development of Knoxville. He donated the land used to establish the First Presbyterian Church and cemetery in Knoxville. White also donated land for the establishment of Blount College, which would later become the University of Tennessee. White died at his home in 1821 and is buried beside his wife, Mary Lawson White, in the cemetery at First Presbyterian Church.

The Fort was restored and opened to the public in 1970 by the City Association of Women’s Clubs. Today more than 10,000 visitors tour the Fort each year and experience the frontier lifestyle through hands-on interpretation including Open Hearth Cooking, Blacksmithing and Spinning.