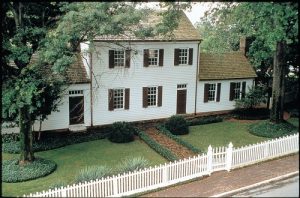 This “house with many eyes” witnessed the birth and growth of Knoxville, housed Tennessee governors and prominent families, and later became slum housing on the Knoxville riverfront. It was saved by early preservationists from destruction, and survives today to tell the stories of Tennessee’s birth and growth.

William Blount, a signer of the United State Constitution, chose to build his home in Knoxville after signing the Treaty of the Holston on the banks of the Holston River just a few hundred yards away from the Mansion’s location. Blount’s Knoxville mansion would serve as the territorial capitol as well as a family home. The care in construction, and the size and shape of Blount Mansion, reflects Blount’s position as a Territorial Governor, head of a prominent family, and influential land speculator. Here William and Mary Grainger Blount raised a large family which included daughter Barbara Blount, one of the first female students at the college which eventually became the University of Tennessee.

The house was made of sawn lumber to meet Mary Blount’s requirement of “a proper wooden house.” Unlike most homes built around what would become Knoxville, Blount’s home was made of timber rather than rough logs or hand-hewn timbers. Nails were brought from the Blount family’s nailery near Tarboro, North Carolina, and glass was brought to Knoxville from Richmond, Virginia. The Mansion was originally constructed as a hall and parlor house with two rooms downstairs and half story loft. The hall was the main room for family activity and for guests, and the parlor, was private space for the family. Upstairs there was a single sleeping chamber, which was roughly finished.

By 1925, the area around the Blount Mansion had been allowed to seriously deteriorate. Slums existed in the waterfront area. Blount Mansion was in seriously run-down condition. Across the street from the Mansion site, the Andrew Johnson Hotel was under construction as part of a downtown revitalization. Efforts were underway to purchase the Blount Mansion property and raze the only home of a signer of the U.S. Constitution outside of the 13 original states for hotel parking. Local figures such as Mrs. B.B. Cates; Dr. James Hoskins; a Dean at the University of Tennessee and President of the East Tennessee Historical Society; and Miss Mary Boyce Temple, a regent of the Bonny Kate Chapter of the Daughters of the American Revolution, spearheaded the effort to save Blount Mansion.

Mary Temple gave her check for $100 to secure the option on the property in November of 1925, and on November 17, 1926, Blount Mansion Association, Inc., was established to preserve the property. Miss Temple served as the first President of the Association. The Mansion was restored and opened for tours in 1930, the same year the last loan of the $31,500 purchase price was paid in full. Now, Blount Mansion, designated as Knoxville’s only National Historic Landmark by the National Park Service in 1965, has become the oldest museum in Knox County.

In 1962, the Blount Mansion Association acquired the circa-1818 Craighead-Jackson House, located across State Street from Blount Mansion. The association renovated the house with substantial support from the City of Knoxville and State of Tennessee, opening the structure to the public in 1966 as a museum and visitors center.

Today, this handsome brick federalist home—one of the oldest in Knoxville still standing on its original location—is used occasionally for special events and programs. A generous grant in August 2020 from the Boyd Family Foundation  will make it possible for us to perform much-needed restoration work so we can begin using the house regularly for field trips and educational activities. You may also rent the historic Craighead-Jackson House for meetings and events.